Here we present some historic games involving Wolverhampton Wanderers, including, where possble, video extracts or highlights.  Early videos from the archives are shown under the original pathe facility to display these on member only facilities

We are indebted to Tony Matthews and Dave Instone for “Wolverhampton Wanderers, The Complete Record” for statistics (Breedon Books updated and reprinted 2009)

Wolverhampton Wanderers have a proud history of Cup Final Victories.  Videos of the 1949 and 1960 final goals are on the site here on the Cup FInals + page

In the 1921 FA Cup Final, held at Stamford Bridge, Second Division Wolves were beaten one - nil by Spurs.

London Wolves have recently acquired this Wolves shirt reported to be worn in that final but not verified.  Obviously men were smaller then as shown by the comparison with a more recent away shirt as worn by a WWLSC leading light! 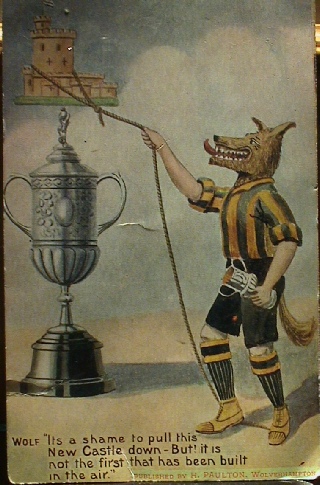 The shirt does show that the design had changed little since the 1908 final, when Wolves - again in the second division - beat strong favourites Newcastle United at Crystal Palace.  This postcard is on display in the Wolves Trophy Room at Molineux, which you can see on the Stadium Tours.

and the 1896-1910 cup, which was sold at auction for £478,000 (20th May 2005) after being given to Lord Kinnaird, FA President, when Manchester United made a replica and the FA realised they didn’t have the copyright is pictured in the postcard and here 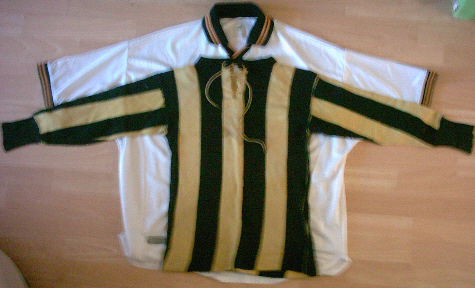