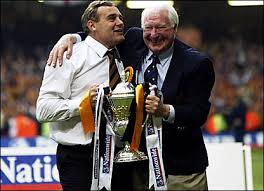 Hired by Sir jack to take Wolves into the Premier League he eventually succeeded via the play off final in Cardiff in May 2003 (Wembley was being rebuilt).   Wolves were relegated the following season and an early defeat at Gillingham led to his departure.

Dave kindly spent an hour with us after the Meet the Players (before the Chelsea 5-2) and talked openly about the lack of funding to support a susttained bid to stay in the Premier League - when the only signing when bottom was Carl Cort who had a terrible lack of ball control - and cost the club another £1,5 million (his transfer fee)  from a careless back pass in the last match of the season against Spurs which cost two league positions and the £800k which went with them

D312DJ6ave Jones has been dismissed by Wolves. The decision was taken today November 1st 2004 by the board following the 1-0 defeat by 10 men Gillingham on Saturday, Rick Hayward stated “ we will always be grateful to Dave for his achievements which included promotion to the premiership something other managers before him failed to do, however being relegated in our first season in the premiership and our poor start to the season was a factor in our decision, it is our wish and intention to make a quick return to the premiership, the board would like to sincerely thank Dave for what he achieved at the club, the board will now begin the process to appoint Dave Jones successor”. Stuart Gray has been asked to take charge of affairs until further notice; the players were informed before training this morning.

Not A Happy Day

Rick Hayward has explained to a packed press conference at Molineux today, of the events that led up to the dismissal of Dave Jones. The chairman said: "This is not a happy day by any means. There have been a lot of telephone calls and discussions between the board and sadly Dave Jones has been relieved of his duties. "Stuart Gray has taken over as acting manager and hopefully things will improve.

"I was quite bullish at the end of the season and said that we would bounce back and monies were made available to strengthen the team. "We have had bad injuries but that is behind us now and, after the disappointment on Saturday, we decided that we had to act. "It was (the Gillingham game) that was very disappointing and I know that the players can do a lot better than that. They have not done Dave Justice. "It's sad that it's come to this but we must move on and hopefully do better. "We will be looking for a new manager - hopefully someone who can take us up at the end of the season."

When asked by a member of the press if he felt sad, Rick replied: "Dave taught me a lot. He is a great guy and a good friend. "But this is business. The buck stops with me.We are 19th in the table and that just isn't good enough. How long do you wait? We felt that we couldn't wait any longer"

Dave Jones replaced Colin Lee as manager of Wolverhampton Wanderers on 3 January 2001. His first game was in the FA Cup when he watched a 1-0 victory over Nottingham Forest at the City Ground. Wolves were in 12th position when he took over the reins and that was to be their placing at the end of the campaign.

During the close season Jones signed Mark Kennedy and Shaun Newton and he also brought in, during the course of the following campaign, Nathan Blake, Alex Rae, Colin Cameron, Kevin Cooper, Dean Sturridge and, initially on loan from Glasgow Rangers, Kenny Miller.

Things started brightly and by the end of September 2001, Wanderers were sitting proudly on top of the First Division. But, after holding an 11 point advantage over third placed West Bromwich Albion, just five weeks before the conclusion of the season, Wolves had to be satisfied with a place in the play-offs. A below par finish saw their arch rivals eat away at the advantage and beat Wolves to second spot in the table behind Manchester City.

The play-off semi-final with Norwich City also ended in disappointment - the Canaries winning through on a 3-2 aggregate.

During the summer months in 2002, Jones signed veteran stars Paul Ince and Denis Irwin. But, at the turn of the year, the team was down in tenth position in the First Division and promotion looked highly unlikely. However, a subsequent run that realised just two defeats from 21 League games meant a fifth place finish and a meeting with Reading in the play-off semi-final - a meeting that was won on a 3-1 aggregate to earn a place in the final against Sheffield United at the Millennium Stadium. First half goals from Kennedy, Blake and Miller (plus a penalty save from Matt Murray) saw the (18 year) long cherished dream of Premier League football finally achieved.

Wolves also reached the quarter-finals of the FA Cup that year, having beaten top flight Newcastle and Leicester on the way to the sixth round. In the summer of 2003, Jones signed a new contract at Wolves taking him through to June 2006.

The stay in the top flight proved to be brief. Despite the inclusion of new blood - including Henri Camara, Carl Cort, Stefen Iversen and Paul Jones - relegation followed last spring.

Results and performances in the current campaign have been disappointing and they have left Wolves just above the relegation zone of the Championship rather than, as hoped, being involved in a battle at the top of the table.

Dave previously was an Everton player and as manager of Southampton kept them in the top flight against all the odds, being perennial favourites for relegation. 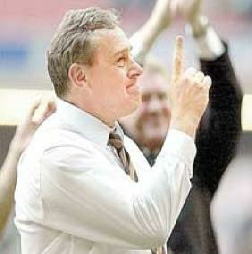