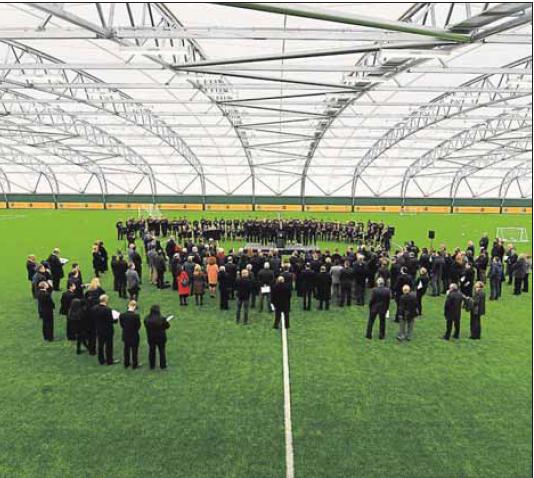 ground in the “village” of Compton just to the south west of Wolverhampon on the Compton and Bridgenorth road.

Originally opened (and paid for) by Sir Jack Hayward in 2005 it underwent substantial development under new chairman Steve Morgan.

IT started as a conversation which turned into a vision – and now it’s a reality.

Wolves opened their £7m academy facility yesterday with the hope of attracting the best youngsters in the land. And if the gathering was any reflection on what is to follow, the club will have a fruitful harvest in years to come. Ten academy graduates currently in and around the first-team squad including captain Danny Batth, plus greats from the past Ron Flowers and Steve Bull, Derek Parkin, John McAlle and Phil Parkes, were also present to see owner-chairman Steve Morgan open the facility that will put Wolves’ alongside the best academies in the country. The indoor arena has the latest Tiger-Turf surface on the full-size indoor training pitch and will act as a ‘show pitch’ to create others around the country. There is a viewing balcony, dressing rooms, classrooms,  offices, state-of-the-art gym, medical facilities and the ‘Wolves Family Suite’ which overlooks the current outdoor floodlit 3G pitch, all to be used by the club’s academy from under-nines to under-18s, as well as the first team.

The overall transformation of Compton Park cost £50m and was created after a chat more than three years ago between Wolves chairman Steve Morgan and Sir Geoff Hampton, who was then vice chancellor of the University of Wolverhampton. Sir Geoff proposed the university campus to leave Compton, sell the land to Morgan’s company Redrow, who agreed to sell half the site to St. Edmunds School and construct 55 new homes.  St Edmunds agreed to sell its land to Wolves, and, as part of the agreement, have a revamped, much-improved school building with the help of grants. (Express & Star) 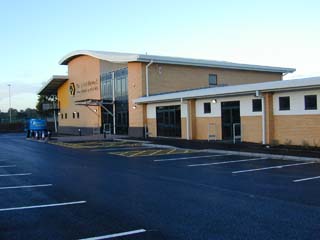 Wolves today unveiled their new £3.3 million state of the art training complex at Compton Park - one mile west of Molineux. The Sir Jack Hayward Training Ground was officially opened by the club's president and owner, after whom it is named. The 82-year-old businessman signalled the completion of 12 months construction work by cutting the ribbon across the main entrance and declaring the new facility 'magnificent'!

Originally estimated to cost £3 million, funds for the training ground were boosted earlier this year after lifelong fan, Douglas Turner, sadly passed away bequeathing a sum of approximately £375,000 to the club in his will.The enhanced amount, when added to the £850,000 cost of laying three football pitches and £450,000 to lease the land, means the entire project has cost the club £4.6 million.

The 2000 square metre training head quarters is the first dedicated facility owned by the club since the Castlecroft Training Ground was sold during the late 1980s.  Plans for the Compton site were initially drawn up 11 years ago and chairman Rick Hayward made the realisation of the project a priority when he took office in December 2003. He said that the centre - which will house the club's professional and academy players - will prove to be a significant landmark in the club's history.

"Having a first class facility like this is a massive leap forward for the club," he said.

"When I first became chairman I realised it was essential to provide our most valuable employees - the players - with the best accommodation possible for them to train at. 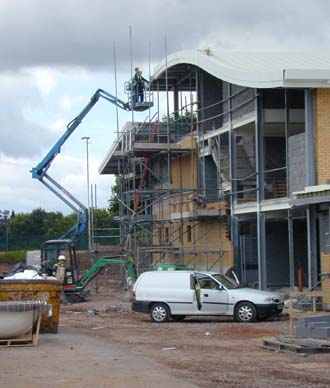 "Having a complex as good as this will not only help our existing squad but will be a major asset in attracting talented players to the club in the future - from senior down to schoolboy level.

"There are a lot of people who have worked very hard on this venture to finally bring it to fruition and I want to sincerely thank them for doing a marvellous job and delivering it on time.

"I particularly want to thank and acknowledge the work of our architects ACP, the main contractor Linfords, our project managers Drivers Jonas and all of the other consultants, sub contractors and workers who have helped to create such a fantastic building."

Sir Jack added: "The building looks magnificent and is something the club can be very proud of. It's a major investment for Wolverhampton Wanderers and one which we hope will bring benefits for decades to come."

Also present at a lunch held to thank contractors and civic officials involved in the project were Wolves chief executive Jez Moxey, manager Glenn Hoddle and club captain Paul Ince. Among the other guests were Graham Taylor, who initiated the Compton plans shortly after he became manager in 1994, and the mayor of Wolverhampton, Councillor Phil Bateman.

Specifics Of The Site 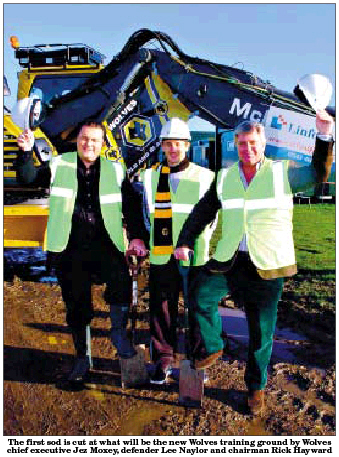 The Sir Jack Hayward Training Ground is a part two-storey building, which measures 72m x 16m, has a curved roof and balcony areas overlooking three pitches and both sides of the building.   Accommodation includes changing rooms (11 in total), medical and physiotherapy facilities, gymnasium, hydro-therapy pool, kitchen and dining room, players' lounge, meeting rooms, academy study centre and administration offices.  The building will be the permanent base for the professional squad and academy players aged 16 to 18 years, for day-to-day training purposes, and for the club's academy games programme. It replaces the temporary changing facilities which have been home to the first team squad since 2002.   The new building complements Wolves' £750,000 indoor arena, which opened in October 2002 at Aldersley Sports Village, where the academy teams - ranging from under eights to under 16s - train on a nightly basis.   The team began training at the Compton Park site in the summer of 1997, with a long term lease being acquired from the local authority in 2001. The club uses three pitches exclusively and shares another two with St Peter's school.   Although the pitches were acknowledged to be of a high quality, the club has never had a permanent home on the site. Instead, players have for the past three years used a combination of portakabins and the neighbouring Wolverhampton Lawn Tennis and Squash Club for changing, gym, dining and media purposes. Before this the squad commuted from Molineux.

Prior to Compton, Wolves trained for two years at Lucas (now Goodrich) on the Stafford Road and Wombourne Hockey Club before that. The only other training facility that was owned by Wolves was Castlecroft, a floodlit ground which was opened in September 1956 by Sir Stanley Rous, secretary of the Football Association. It was sold during the late 1980s and was developed to become a Rugby Football Union Centre of Excellence.   Wolverhampton-based ACP, who designed the redevelopment of Molineux Stadium, were appointed as architects for the Compton Park project and Lichfield-based Linford Group have undertaken the construction work. The project managers were Drivers Jonas, based in London.

Eighty per cent of the subcontractors are Midland-based companies. They include:

The most far-flung supplier was SwimEx of New Jersey who provided the hydro-therapy pool.Wolves are one of only a handful of English clubs to own such apparatus.   The SwimEx, or endless pool, is commonly used by professional sports clubs in the USA. and Michael Oakes has already been working on his ankle injury from the Watford match in the pool

A Facility To Be Proud Of - Glenn Hoddle

Glenn Hoddle can't wait for his squad to take up residence in Wolves new £3.3 million training complex.   The boss believes the building will bring countless benefits to the way Wolves organises its daily training schedule.  He says: "All the players and coaching staff are very impressed. It's even bigger than we thought it would be.

"It's come at a good time for us because, with the winter just around the corner, using portakabins isn't the best way to prepare for training.

"We can't wait to get in there. Everything is going to be so much more efficient - countless things are going to be better for us.

"Even small everyday things such as talking to an individual player privately have been difficult because of the lack of space we've had to work in. Now we will have proper facilities for reviewing videos, we'll have a bigger gym and a first class medical room. We've even got a hydro-therapy pool which will allow us to do initial rehabilitation work with injured players, who can't weight-bear, on site.

"The players' dining and lounge facilities will be good for team spirit and the fact that the academy will be using the same building means there will be improved lines of communication between us.

"It will also be somewhere we can bring players we are trying to sign. Up until recently the training ground was the last place you'd show them - we'd always take them to Molineux instead. But now we have a facility that we can really be proud of."

Prior to the rebuilding of Molineux under the Hayward era, Wolves' training sessions had a somewhat nomadic feel to them with the squad using a variety of venues.   The Castlecroft Ground, which was hailed as one of the best facilities in the country when it opened in 1956, had been run down by the time it was finally sold in the late 1980s.  Wolves' record breaking striker Steve Bull recalls the conditions players faced when he arrived at the club in November 1986.

"Castlecroft was shared with the rugby club and the pitch was virtually a bog," he says."When it was sold off we spent a period training at Dunstall Park Racecourse, close to Molineux. Pitches were marked out in the middle of the course! "We had no changing facilities there so we got changed at the ground and either drove the mile or so, or sometimes the manager Graham Turner used to make us run there.  "The dressing rooms at Molineux weren't in great condition either, with a leaking roof and cockroaches crawling about! "Later we trained at Wombourne Hockey Club which at least had changing facilities and a couple of fantastic supporters, Jack and Olive Carr, who used to make breakfast for us - and pay for it sometimes out of their own pocket."I think it's great that the club has finally got it's own proper training ground now - a club the size of Wolves needs that. It's a great facility and I'm sure it's going to be a big benefit to the players."

For the design of the new buildings at Compton page down

“The first sod is cut at what will be the new Wolves training ground by Moxey Nayls and Rick” - borrowed from the E&S.   If you want to read the E&S and don’t live anywhere near Wulfruna then go here