2011-12 Season Review - Relegated from the Premier League with only slightly better results than Sunderland’s all time lows; sacked manager; and a new stand.   Click on month for reports: 2012-13 ReviewAprilMay13Mar13Feb13Jan13Dec12Nov12Oct12Sep12Aug12preseason

For the first three games, with a couple of Carling Cup wins thrown in for good measure, Wolves seemed to be looking good.  Top of the Premier League (briefly) after the goalless draw against the Villa following two wins, even the pundits thought we would be safe.   Only two signings - the injury prone Jamie O’Hara and the recently relegated Birmingham centre back Roger Johnson but still full of promise.  Johnson was made captain and after a good start became the worst centre back in Wolves history, culminating in a pedestrian display against the Baggies, passing the ball to opponents - one of these brought a fiery outburst from the player of the season, the normally mild Wayne Hennessey and finally (allegedly) turning up drunk for training,   Anyone who attended the last match of the previous season and witnessed the abject first half display against Blackburn when a win would have secure premier league survival should have known that serious surgery was needed.   The new season euphoria lasted just one more game - a two nil cakewalk for the Spurs was followed by a 3-0 thrashing by newly promoted QPR.  QPR! with Joey Barton!  This was the time for a change if there had to be one.  Mick was told “you don’t know what you’re doing after a few more defeats when we were two down against the Swans with ten minutes to go, but his subs got two back as Swans were suckered.  But we dropped from first to seventeenth by November.   A win over relegation threatened Wigan lightened the view and then another over Sunderland (before Wolves fans preference Martin O’Neill picked them up).  That was it though - 15th the highest position as we were in the bottom three in January and relegated in April.  Mick was duly sacked after a 5-1 thrashing by the carrier bags at Molineux when it was too late to change playing personnel or stop the rot.  The directors box was besieged by fans, and it had all the appearance of real panic.   This was a sad end to an outstanding contribution to the Wolves by a manager who couldn’t do enough to be nice to fans, to support them and raise the status of the club.  Poor Terry O’Connor got stuck with the hopeless task to save the Wolves from relegation.

There were of course some highlights among all the doom and gloom - Wayne Hennessey was outstanding - unfortunately by far and away the busiest keeper in the Premier League making over 30 more saves from shots on target than the next nearest GK - over 160 for the season curtailed by injury with four to play.  A bad deal for Wayne but from a fan perspective it appeared to have saved us losing him to a prem club.  Danny Batth had a fantastic season at Sheffield Wednesday gaining automatic promotion and we hope he will solve the defensive problem for our return to the Championship.  Kights finally made it back from injury - a brief loan at the Hornets got him match fit - and he turned in several man of the match performances.   Jarvo finally recovered his mojo, and started scoring again.  The delight on Mick’s face when top scorer Fletch equalised at the Arsenal (see the LW magazine) and another comeback to draw 4-4 at Swansea but only 5 wins and 10 draws and a goal difference of -42.  To cap it off the E&S reported that the probably unsaleable Johnson didn’t have a relegation clause in his contract!  The highlight about  him came from Paul Merson’s rant on Sky about his performance and his wife’s tweets.   Terry correct a misjustice by restoring Karl Henry’s captaincy for his spell in charge.

So, on to another season in the Division from hell.   But Wolves moved quickly to appoint Ståle Solbakken - League winner with Cophenhagen who beat Man U in the Champions League and equally quickly in recruiting the “best player in the Norwegian Leagues”.

For earlier seasons please go to the Newsletter page here 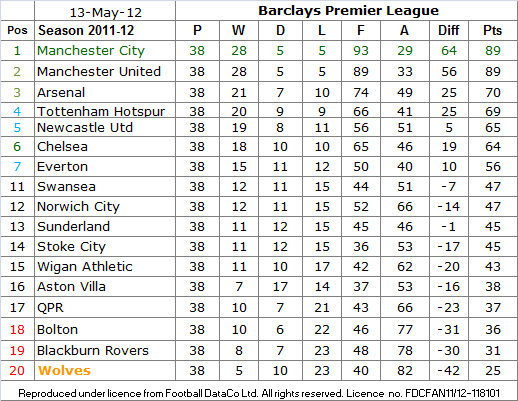