1974 was the only major cup trophy which Derek Dougan won.  Wolves came into this as clear underdogs against Manchester City It was the year of the League Cup final win, and stirring wins over teams like Arsenal and Chelsea.

In 2011, as part of the London Wolves 45th Anniversary Dinner here and  here, we welcomed most of the 1974 League Cup winning team and especially our two goalscorers Kenny and King John pictures are here and here and a special video message from Captain Mike Bailey here.  WWLSC Attended the Route 39 League Cup dinner with all three League Cup Final scorers attended pictures here 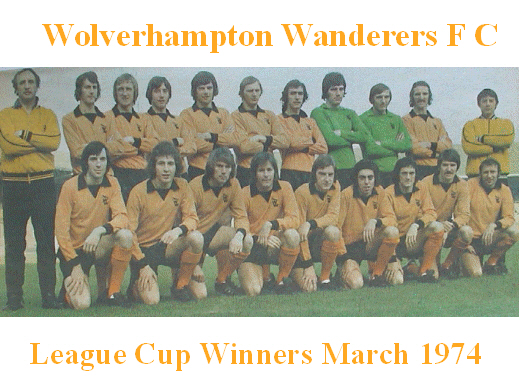 The Wolves shop has the 1974 Final match on DVD and Video.   The goals are shown below - click on Kenny’s and John’s pictures to see their goals

And the next pictures show Mike with the cup and at Wembley (note the Doog giving thanks!).  In the third picture Derek is crying but legend Dennis Law is saying it should be him.  Scottish International Law joined City from Manchester United and famously scored the goal which relegated them in April 1974. 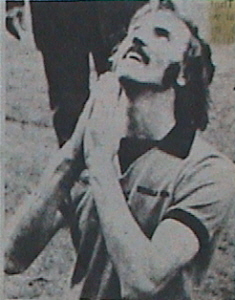 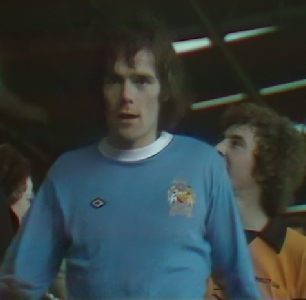 Star of the show was keeper Gary Pierce.   Bill McGarry announced him as man of the match.  Gary had long paid second string to Phil Parkes, but an injury left the door open for Gary.  He tells us he was on £25 a week, with a £5 bonus for keeping a clean sheet!   Wonder how Michael Oakes compares!

Wolves route to the final including a stunning 1:0 victory over champions Liverpool with a 57th minute goal by John Richards.    Results tables courtesy of Wolves Stats http://www.wolves.stats.btinternet.co.uk/seasons/1970s/1973_74.html (no longer available - look at Wolverhampton Wanderers - The Complete Record by Tony Matthews and Dave Instone

Wolves also competed in Europe, while the season kicked off with the third place FA Cup Final victory from the previous year’s competition over Arsenal

Here’s the first half in full

And here’s the second half

Leeds Utd won, Liverpool were runners up and Manchester United were relegated by Dennis Law’s back heel  when Man City beat them 1-0 in the last game of the season (along with Norwich)