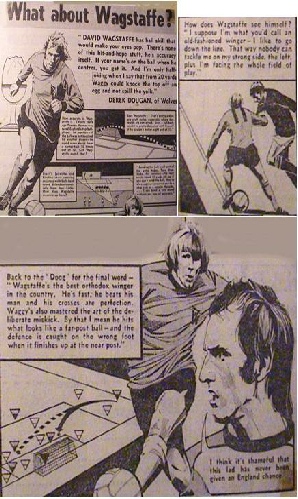 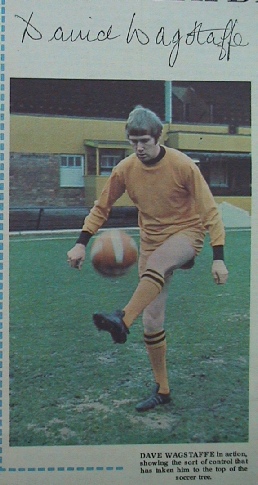 David Wagstaffe (Waggy) was an exciting left winger for Wolves in the late 60s and early 70s.  Altogether he played for us for 11 years and was one of the most accurate crossers of the ball ever.  Dave sadly passed away on 6th August 2013 at the age of 70 and his funeral was on 22nd August Before the 4-0 win against Gillingham a minute’s applause celebrated his life. (picture Robert Goddard)

Waggy and his partner Val were welcome guests at many of our London Wolves events.  We presented Val’s chosen charity with a cheque for £100 in Waggy’s memory

Previously Dave wrote his own memoirs - Waggy’s Tales  - no ghostwriters so it’s just as he saw it - a great read.  For details see below click here  Our London Wolves competition to win a copy of “Waggy’s Tales” was won by Peter Jackson and Maurice from Molineux Mix .   Published by Breedon Books 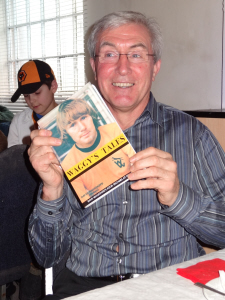 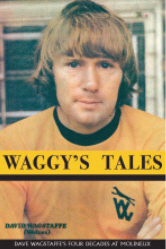 Waggy started as a Man City apprentice, graduating to the first team, but joined us on Boxing Day 1964 for £30,000.  What a Christmas present, and a real bargain!  Although we were relegated that season he was instrumental in our return to the top flight in 67. He never made full England honours in spite of the Doog’s endorsement in the cartoon here, but, of course, has a League Cup Winner’s medal from 1974.  Waggy said that he was annoyed that one of his best ever goals was left out of the History of Wolves DVD – that one against Spurs in the EUFA Cup Final - He made 404 appearances and scored 32 goals. Waggy left the Wolves in 1976 for Blackburn where he gained the dubious “honour” of being the first League footballer to receive a red card.   He did run Waggy’s bar at Moli for some time long after he’d retired.   cartoon courtesy of the Express & Star from the Goddard archives

Brian Restall also picked this us about Waggy being Beckham’s predecessor in the US http://thesoccerobserver.com/2013/08/06/dave-wagstaffe-early-u-s-soccer-champion-and-icon-dies-at-70/

* Senior club appearances and goals counted for the domestic league only. † Appearances (Goals). 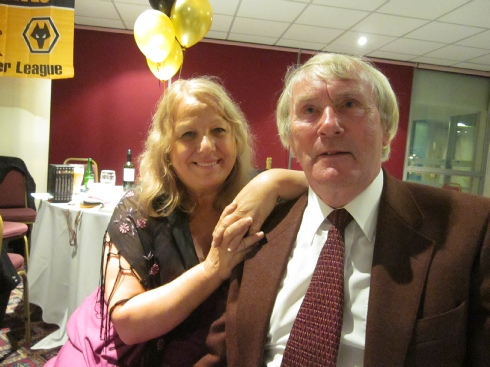 DaveWagstaffe may have left Molineux for Blackburn Rovers in 1976, but he will always be remembered as one of the finest wingers ever to represent Wolverhampton Wanderers. In this fascinating memoir, written without the aid of a co- or ghost-writer, Waggy lifts the veil on a sporting world frequently shrouded in myths and rumours. In a tale that is by turns comic and powerful, but always heart-felt, he reveals what life was really like as a professional footballer.

‘As with any job’, the author says of life as a footballer, ‘there were many ups and downs, but as a footballer you could have more than 30,000 people watching you when you were on a downer’. In this hugely engaging memoir,Waggy invites the reader to relive the ‘bumpy ride’ that was his professional career.

His story begins at his local club, Manchester City, in 1960. It is four years later however, when his move to Molineux was finalised on Boxing Day, that the rollercoaster really kicks in. Making over 400 senior appearances, Waggy moved from key figure to squad legend. His characteristic class and skill ever-evident, Waggy was a constant fixture at all pivotalWolves events in the 1960s and 70s. Waggy was there in his number 11 shirt for two major league finals, he was there when promotion was achieve d in 1967, and he was of course there when his old team was defeated in the League Cup final of 1974. Now, for the first time, he describes how it all appeared from the inside.Written with wit and vivacity, ‘Waggy’s Tales’ is a must-read for all Wolves fans. DAVE WAGSTAFFE, born 1943,

started his career at the Manchester City youth side before moving to the professional squad in a left wing position. Although he ended his career at Blackburn Rovers, Wagstaffe spent the majority of his career at Wolverhampton Wanderers

Pictures from Front & Back covers courtesy of Dave Wagstaffe and Breedon Books. 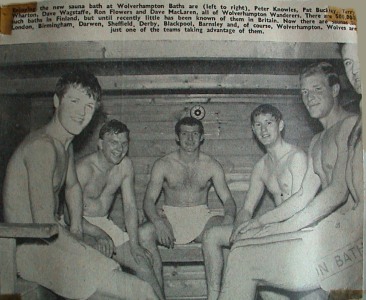 Waggy was inducted into the Wolverhampton Wanderers Hall of Fame shortly before he died.  Here is Wolves’ tribute video from the induction