Sunday 29th May 1988 80,841 Wolves won the Sherpa Van Trophy Final at Wembley in front of 80,841. Bellamy clipped the bar early on and then in the 23rd minute Steve Bull clipped the ball on for Andy Mutch to head Wolves in front, sparking off joyful scenes amongst their amazing following of approximately 45,000 supporters. Dennison, who by now had also appeared for Ireland in a World Cup Qualifier, curled a free-kick beautifully into the top corner of the net to make it 2-0 after 51 minutes.

However, Wolves had lost two players while others had received treatment for injuries so it was hardly surprising that Burnley dominated for a long period in which they did everything but score. Yet it was Wolves who finished back in control with Mutch hitting the post as they proved worthy victors on a wonderful afternoon for football 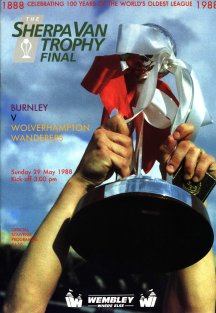 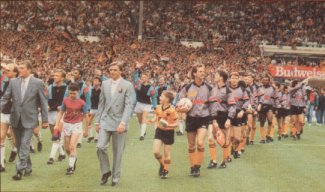 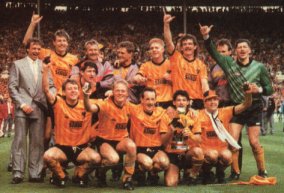