London Wolves London Wolves annual “Meet the Players” was held on 29th April 2005  at the team hotel for the Reading away match (what a great win). The players all seemed up for the match and they all 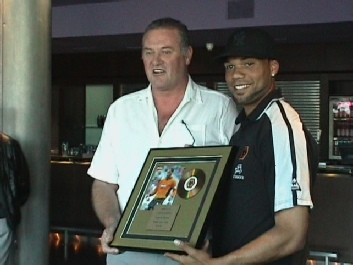 applauded warmly as their choice of Players’ Player of the Season was also awarded WWLSC Player of the Season for the second time - Joleon Lescott.  Lee Naylor, runner up, said “My award was bigger and it’s still on my wall”. For the WWLSC Roll of Honour please click here

Glenn Hoddle had kindly agreed to continue this tradition and spent 45 minutes asking us questions before fielding the obvious one (amongst others) himself.

Asked by Stef what he could say about the contract negotations, he spotted a water skiier and asked what on earth Kenny was up to.

More pictures, including Kenny without his hat on, Glenn’s pro-zone quiz questions, and some of the other answers from Glenn are on the Meet the Players page in the members’ section (here).

The players had come down from Wolverhampton to the warmest day of the year, brilliiant sunshine and a training day at England Headquarters at Bisham Abbey, well prepared for a great result at the Madejski on Saturday (won 1-2).

Glenn did say he hadn’t yet got to discussing personal terms because he’s more concerned at the moment to understand what the Club will do for promotion and what will be done to preserve Premier League status.

The players had come down from Wolverhampton to the warmest day of the year, brilliiant sunshine and a training day at England Headquarters at Bisham Abbey.  Jonah said they’d done the same before the QPR match.

Here are our goalkeepers - coach Bobby Mimms with Jonah and Oaksey and Reading winning goalscorer Rohan Ricketts in the background. Coops and Mickey Cameron are getting cosy, Coops again, Jolon and George, Kenny (who very kindly removed his ever present hat) and smiling after talking about his two goals against Rotherham and Reading scorer Leon.  Smoth Rob Edwards, Mikkel Bishoff and Soel were strolling in the grounds with Reading Man-of-the-match Seyi George Olofinjana.  Mikkel answered questions from one Londoner and Travel Secretary Peter Woodifield decided to spend all the Club’s funds getting Seol to sign a long term contract.