Wolves were crowned League 1 Champions breaking league and club records all the way..   In a close run fight between goalkeeper Carl Ikeme, midfielders Bakary Sako and  Kevin McDonald, full back Scot Golbourne and striker Nouha Dicko…….Kevin McDonald ran out the winner.   We hope to present Kevin with his trophy prior to the Brentford match. 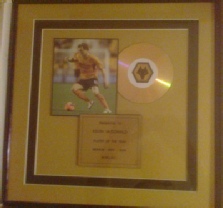 2012-13 Championship - BAKARY SAKO in his first season at the club.  We hoped to present the award before the Charlton match but Bakary is carrying an injury and could not  travel so Manager Dean Saunders accepted the trophy on Bakary’s behalf - here presented by Chairman Earl. 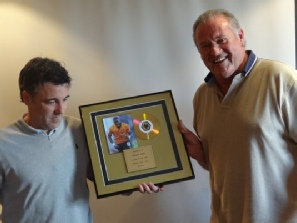 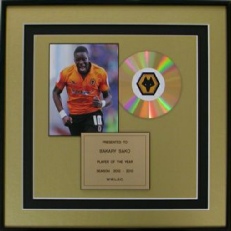 The brilliant Wales #1 gave Wolves the best shot at staying in the Premier League.   In spite of being injured for the last few matches he was by far and away the most prolific shot-stopper in the League, unfortunately, but he joins the honoured few who have won the trophy for a second time.    When the trophy was presented to him, nice man that he is, he was full of praise for Carl Ikeme’s performances in goal as we returned to the Championship

Wayne was presented with the trophy by James Perkins, assisted by dad Dean, Simon Overmee, Robin Prickett and secretary Slape. 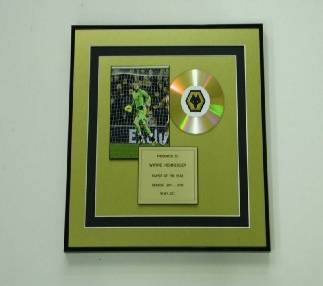 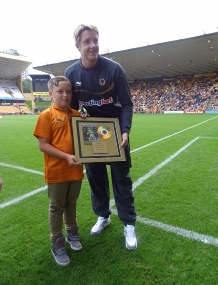 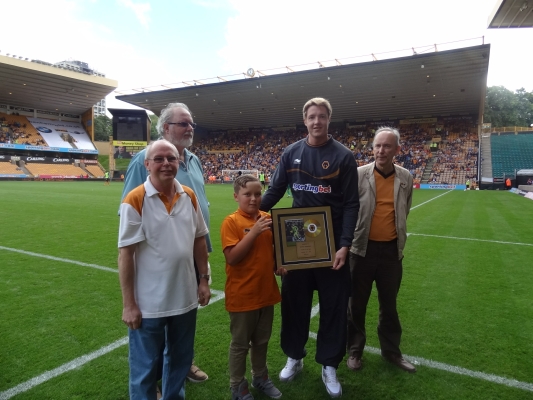 A landslide vote for Wolves latest England player (since Bully that is).  The second top “assists” player in the Premier League - Matt Jarvis is our player of the season 2010-11.   The presentation was made at Molineux on Sunday 21st August before the first home match of the season against Fulham and which was also the the tribute to Frank Munro.  Peter Abbott,  Dave Slape, Roy Eagles, and  Peter Bartlett joined Chairman Earl for the presentation. Picture courtesy of Wolves Official Photographer, Sam. 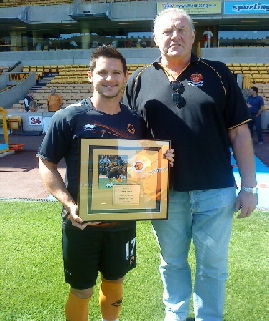 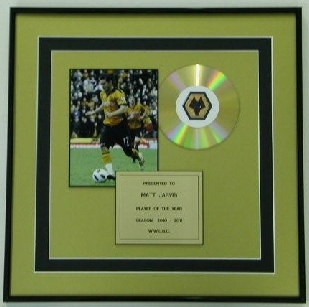 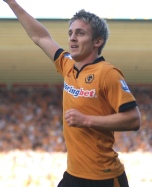 2009-10 Wolves’ record signing has made an outstanding contribution to our survival attempt in our second season in the Premiership.  Kevin Doyle was presented with the trophy at the 2009-10 Meet the Players (pix) at the team hotel on the night before the away draw at Craven Cottage. Trophy picture of Doyler again courtesy of Peter Harrington at Ivanhoe Photography (here)

2008-9 - the Championship winning season resulted in a strong result for golden boot winner Sylvan Ebanks-Blake, ahead of Kevin Foley and Kights.  The presentation was made by Graham Stancombe, Paul Coles,and  Dave Slape,  before the Real Valladolid pre-season friendly on August 8th one week ahead of the Premiership kick off. We’d like to thank Peter Harrington, photographer, for permission to use this photograph of Sylvan scoring at Sheffield Wednesday in the Championship (and second consecutive Golden Boot) season. 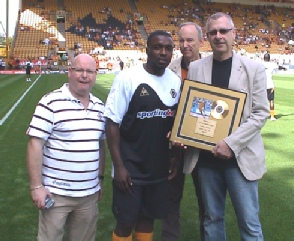 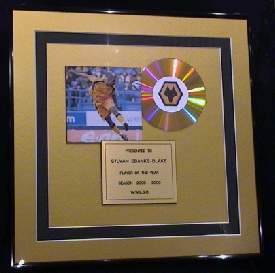 The 2007-8 winner  Wayne Hennessey was presented with his trophy at our Meet the Players event on Friday 28th March before the last London game of the season.  Chairman Earl performed the presentation - citing Wayne’s amazing 17 clean sheets already. 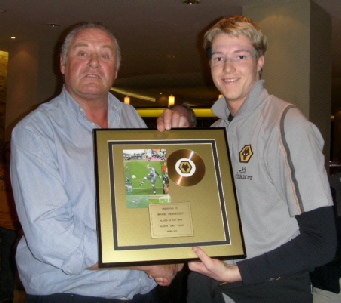 2006-7 our winner of the player of the season trophy was Matt M u r r a y, g o a lk e e p e r e x traordinaire and responsible for getting us to the playoffs with astonishing match winning and saving saves.   Peter Woodifield, Trevor and Callum Reed present Matt with the trophy at the first home game of the season.  Matt had a bad shoulder injury the day before the first leg of the play off finals in May 2007 against WBA, giving Wayne Hennessey his League debut with Wolves, but Matt has looked to recover well over the summer break. 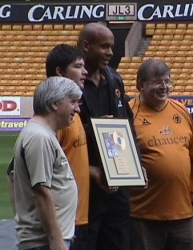 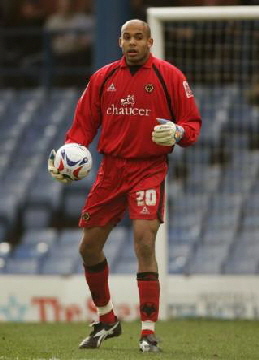 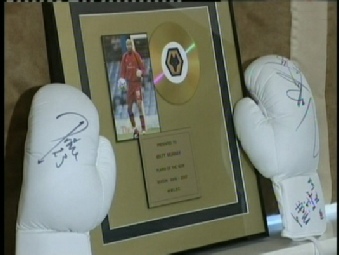 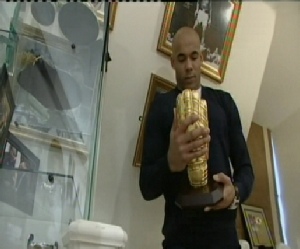 London Wolves 2005-6 Player of the Season is again Joleon Lescott, one of only two players to win the award three times.  Unfortunately, we were soon to learn that the club had sold “the best defender in the Championship” to Premiership Everton for around £4.5million (installments over 2 years +). Our very best wishes go to Joleon as he makes the step up.  He missed Wolves entire season in the Premiership with knee injuries.  Matt Murray very kindly presented Joleon with his trophy in 2010! 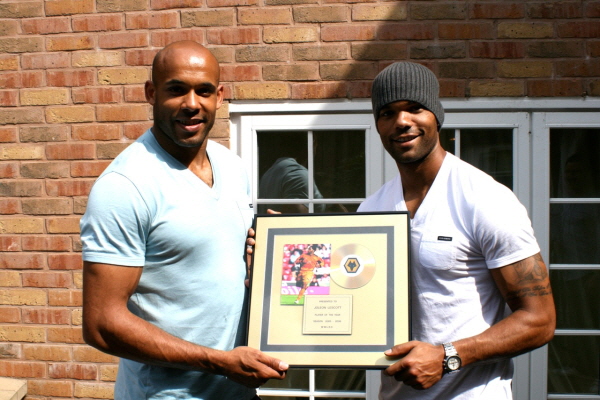 Congratulations to Alex Rae our 2003-4 winner on winning a Scottish SPL Championship with a last day victory over Hibs and with Celtic surprisingly beaten by Motherwell.  Rangers won by one point.

At the London Wolves Meet the Players evening on 29th April 2005 Chairman Stuart Earl presented our choice of Player of the Season with his trophy.  Joleon, winner in he promotion season again edged out 2000-1 winner Lee Naylor, generally also agreed to be most improved player of the season.  Lee says he still has the trophy on his wall.  Joleon also said that it was very special to have been presented with the Players’ Player of the Season at the tribute dinner to Sir Jack two nights earlier.

For the Premiership season 2003-4 our choice was Alex Rae, seen here being presented with his trophy by Chairman Stoo.  London Wolves wish Alex every success at his 2004-5 club, Glasgow Rangers.  We’re delighted to congratulate him on his Champions Medal as Rangers take the Scottish Premier League championship from Celtic on the last day of the season.

Alex, season top scorer with 8 league and cup goals, kept our hopes alive of staying in the Premiership long beyond the pundits’ predictions, and indeed in the FA Cup when Kiddy nearly took us out, and while Camara, controversially awarded the club’s own award before deciding he didn’t want to stay, was missing opportunity after opportunity. Alex won the Premiership Goal of the Month award too, for his stunning shot against Bolton which gave Wolves our first ever away Premiership point in a 1-1 draw.. and this well known picture comes from the First Division match against Derby 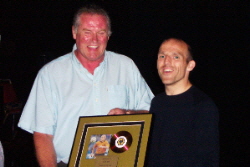 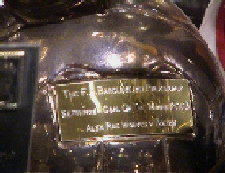 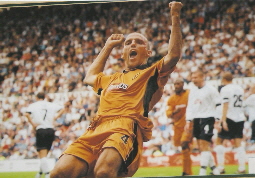 2002-03 One of the players missed most of all during the premiership season was centre back Joleon Lescott who won our Player of the Year award for the promotion season.  Here he is at Molineux receiving his award from Dave Bracher, Dave Slape and Jack Sammuels.

and here is Ludovic Pollet receiving his award for 1999-2000 from Bob Richards, Dave Bracher and Peter Davies in 2000.

Special thanks to Peter Abbott for the presentation photos from the 80s.  Peter’s in most of the photos. 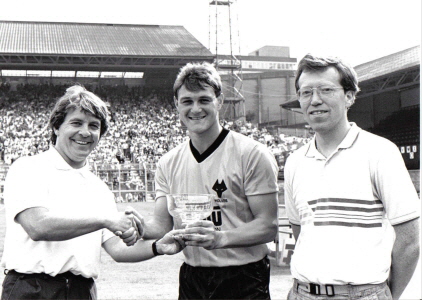 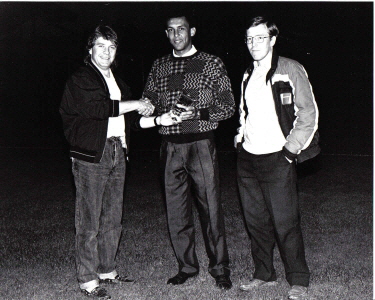 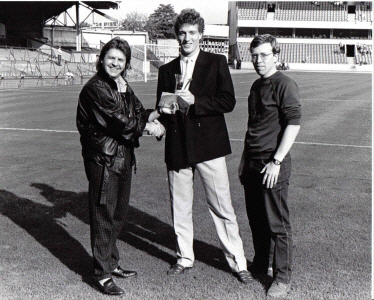 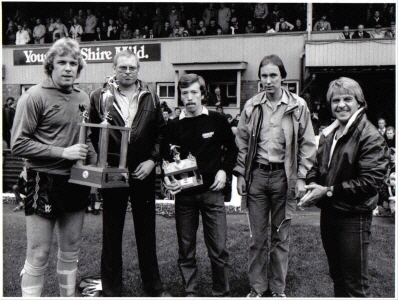 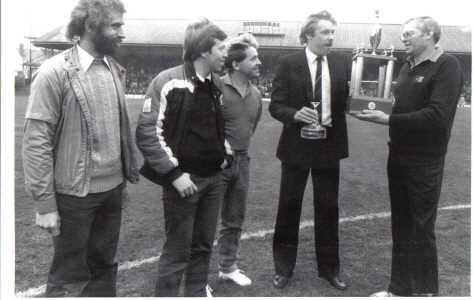 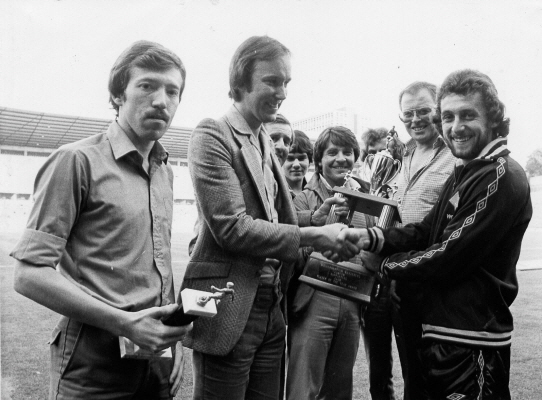 and WWLSC also made a presentation to the physio Dennis Conyard LCSP (Physio) who was the first team trainer at Molineux from 1983-1985. 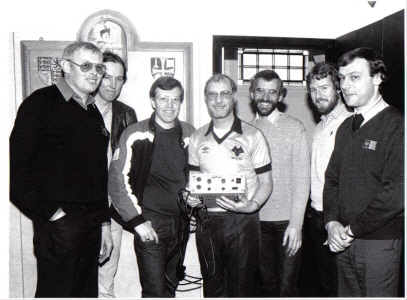 A special award was also made to our favourite Wolves Manager, Graham Turner